I’m currently reading a book called Great French Short Stories. It is a collection of famous short stories by famous French authors. The first story is “The Legend of St. Julian the Hospitaler” by Gustave Flaubert and I read it a few days ago. The story is interesting, if predictable. The main play of the story is between three competing prophesies, which all seem to come true, but as always, one is truer than the others. Now, prophesies are sometimes a very easy tool for authors to use. They’re a sort of Deus Ex Machina, making it easy to come to a foregone conclusion without much explanation. Of course, how much the author leans on the prophecy to cop out of writing the story is important, and Flaubert doesn’t lean too much. The story grows, largely ignoring the prophecies and silently fulfilling them, till the last and most important one.

This is where I feel there’s a flaw. Not in the story per se. The story is quite nice, but in… something.

See, I’ve mainly seen prophecies in science fiction and fantasy stories. In science fiction, prophecies are like ‘fixed points in time and space’, as Doctor Who calls them. They’re independent of external factors, least of all ‘God’. In fantasies, prophecies come from darker sources and often are convoluted. A prophecy may not get fulfilled in the exact way as it is said and the author often takes a roundabout way of explaining how the prophecy was indeed fulfilled. Anyone who’s read Harry Potter or watched Alt+Shift+X explanations of Game of Thrones knows this.

But Flaubert has written what to me seems to be religious fiction. In this, all prophecy and all of the story line flows ‘from God’ and thus, while the conclusion is inevitable (the title of the story is a strong hint for the ending), there is, for the longest time, the illusion of free will and coincidence in the story, thus leading to some chaos and some probabilistic chance that the prophecies might not get fulfilled. Flaubert shows off these vagaries beautifully, all the way up until a fatal line towards the end of the second part of the story. The line is –

Since there were no animals, he would willingly massacre humans.

Here’s my problem with this line –

People who have read this story, what are your thoughts on this?

Side note – Once every year or so, I remember that a long time ago, I purchased a device called the “Chromebook Mario” from someone on eBay when I was living in Boulder. He did not seem to have any use for it and wanted to part with it simply because one of the keys was broken and that somehow made the device ‘less pristine’. I got it for cheap. I remember that I still have it, so I find it, charge it, fire it up and play around with it. I do a lot of things in the browser, but not everything, so it can never be my primary device. It’s just an interesting thing to play with. What surprises me is that every time I fire it up, it has updates for me and yet, every time, the speed and performance I get from ChromeOS seems to not have changed. My logins change and need syncing, my extensions change and need setting up, and then I reboot the device to update the software.

But it comes back quickly and works like a charm! Kudos to Google for making this excellent device and supporting it for so long (I currently own a Mac on which Chrome specifically warns me that the browser version I’m running is no longer supported and I need to update the OS and then Chrome to get the latest security features). I wrote this post on the Mario and can perhaps use it as a writing-only device, if only it didn’t also have all the trappings I’ve come to associate with the Internet (the first tab I always open in a browser is my RSS reader).

Some time ago, my brother came to me with a problem. He loves LinkedIn. It’s a great service. But as much as he loves connecting with people on that professional network, there are some glaring inefficiencies that he does not appreciate. He wasn’t interested in removing ads or making it look nicer. He just wanted to see the information that people intend on displaying on the site. You see, there’s a plethora of information available on LinkedIn, but it’s mostly hidden.

For some reason, if you’re landing on a user’s profile from LinkedIn’s user search, or from a Google search, you end up seeing this – 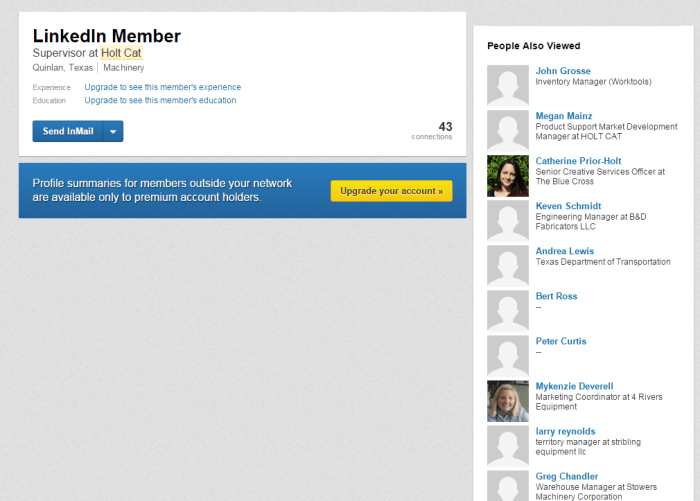 But what you should really be seeing is, at least, the user’s name, a little bit about their history and experience. Essentially, you should be seeing something like this – 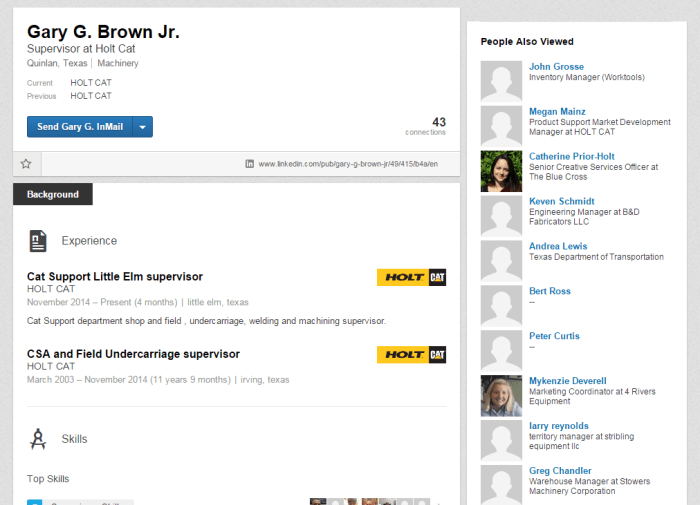 LinkedIn’s been around since some time now, but they haven’t fixed this weird issue and so, your LinkedIn experience is often curtailed by what can only be called a minor bug.

Not any more. Today, NiKhCo. has launched a new tool, “LinkedIn Reveal”, which will solve this absurdest of LinkedIn woes. It enables you to explore LinkedIn with the depth you never thought possible. We’re not trying to build something that changes the way LinkedIn displays information or makes things look fancy. We’re just building something that lets you see LinkedIn as it truly should be – a beautiful, open, professional network with all the information you need about people, companies, jobs and connections. 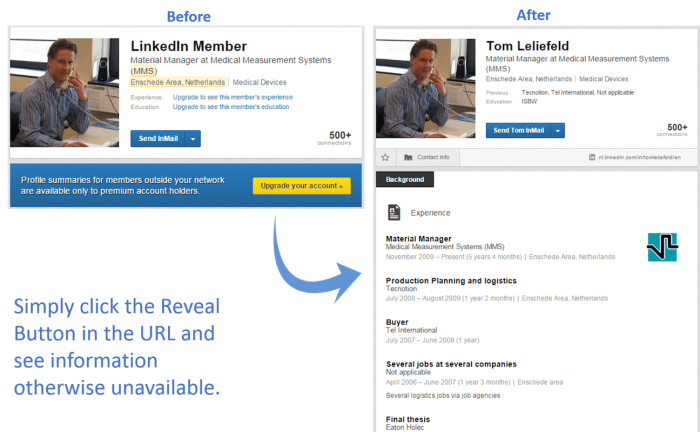 More like a Life Blog. Updates come as they please.

*P.S.* If you’re here from Twitter or ADN, please wait for the latest updates to load, then look for the post you are here to read.

I’ve been reading a lot of discussion on App.net about how the concept of reblogging/retweeting is going to grow on the network. Since I don’t know how the idea of a retweet (RT) grew on Twitter, I went hunting for information. Turns out, Wikipedia details out the growth of the RT on twitter in this article here. Turns out, the concept of using @ to signify a user and RT to signify a re-post grew organically among twitter users around 2008. This troubled my mind a bit. So, in essence, the growth of culture on twitter was independent of what the company wanted and instead, was in the hands of the users.

Now we come to a discussion on App.net. This discussion right here – Echoes, RPs and “>>” talks about people using the “Share” button on Google Chrome via an extension called Succynct by developer and App.net member Abraham Williams. The point to note is that since the platform is still in it’s infancy, a proper lingo for re-posting has not yet been decided and the creator, Dalton Caldwell has just been using the lingo “RP” for RePost. The conversation flows to discuss the concepts of “>>” and finally, that of “Echo”. Here is where the biggest problem lies. The developer, having a distaste for “>>”, says that in the next build of his extension, he’ll consider adding the “Echo” keyword.

App.net started as a way to hand over control of the flow of conversation to the people. The promise is that no longer will we be plagued by advertisements and spam bots. The promise did not talk about who would have control over the ideas and the culture. This means that people building on top of App.net have the ultimate control. Now here’s the thing – A common user of App.net pays $50 per year while a developer pays $100. Obviously, there will be a lot fewer developers than users. This also means that those making all the apps, extensions and services on top of App.net will be very few. Compare this with Facebook, Twitter and other ad-supported networks. Anyone can get up and create an app. Thus, the onus of deciding lingo rests either on the common users who popularize concepts (as in the case of Twitter) or in the hands of the company (Facebook).

App.net is pretty young right now and because of the promise made to it’s users, the company has rested control of the culture into the hands of the common users. Or maybe not. The disparity between paying users and paying developers means that a concentrated few will get to decided how things formulate. The reason, if it’s not clear to everyone is that a lot of users for all social networks nowadays are mobile. That means that the default web interface for App.net is not going to dictate culture as well as iOS apps do. Even when users are on their desktops, extensions like Succynct will rule the platform and create culture.

Maybe these predictions will come true and maybe not. But the fact remains that as long as App.net retains this business model, the power to create something on top of it will not be in the hands of the masses. Perhaps when App.net has proven it’s point and penetrated a large chunk of the market, it should revisit it’s developer strategy and open doors to many more people, thus making sure that it remains true to it’s goals.

Google launched their Chrome browser for iOS (iPhone and iPad) yesterday. Within minutes of the launch, the Internet was full of news of how laggy and useless the browser was because of the many restrictions on third party browsers by Apple. One blogger even went on to show with HTML5 rendering tests that Chrome was twice as slow as mobile Safari.

Great, so you found bugs in an app that’s just been released. I found a feature. I was doing some research last night about WordPress. I left the tabs open in my laptop’s Chrome browser and slept off. Today, while standing at the bus stop waiting for transportation, I whipped out my iPhone and opened Chrome. Under the “Other devices” section, I quickly found the tab that is open on my computer and continued my research. Simple as that.

I know that the browser has its faults but not because of something Google did. In fact, Google fulfilled a long running request – to bring the Chrome browser to iOS. It is Apple’s heavy restrictions that do not allow Chrome to function so well.

After Apple’s shifting away from Google Maps in iOS 6, there’s not much goodwill left in the companies *in my opinion* (in case you’re about to refute, I know Google pays millions to Apple to be the default search in Safari). I say Google et al should sue Apple for monopoly over the iOS browser as Netscape vs Microsoft was.